The best recognized intestinal manifestation of food allergy is food allergic (food-sensitive) enteropathy. The feature of enteropathy may include lymphocyte and plasma cell infiltration, epithelial abnormality, or crypt hyperplastic villous atrophy, and impairing absorption, enterophaty continues while the food remains in the diet, remitting on an exclusion diet, and usually recurring on food challenge. Diagnosis is now usually based on histological features at initial biopsy and clinical response to antigen exclusion and challenge. Clinical findings in food allergic enteropathy include abdominal distension, loose stools, micronutrient deficiency, and rarely protein-losing enteropathy. There may be other features of allergic disease, most commonly eczema unlike coeliac disease, food allergic enteropathies are usually transient in early life, and later challenge is usually tolerated. Cow’s milk-sensitive enteropathy (CMSE) was the first recognized food allergic enteropathy and remains the most common cause.
The best-characterized syndrome is CMSE, classically presenting with chronic loose stools and failure to thrive, often beginning after an episode of gastroenteritis in a formula-fed infant. Other clinical features include abdominal distension, perianal erythema or napkin rash (due to malabsorbed dietary carbohydrates), and deratographia. Associated clinical features may include colic, gastroesophageal reflux, rectal bleeding, or eczema. There may be evidence of micronutrient deficiency, notably for iron and zinc. Up to 40% of infants with classic CMSE also sensitize to soy, often after an initial period when it is tolerated. The great majority however settle on extensively hydrolyzed formulate. Classic CMSE is usually self-limiting, with most children tolerating reintroduction at the age of 2 to 3 years. By contrast, some children may have persistent low-grade symptoms for a prolonged period. A proportion of children manifest additional immediate reactions to food antigens, such as rash, urticaria, angioedema, or anaphylaxis. However, many children suffer enteropathy without immediate reactions, and it is important to recognize that food allergic entropathy often occurs in the absence of systemic signs of food allergy. Thus, skin prick tests may be negative and specific IgE undetectable.  Review of growth records in classic CMSE often shows a period of good weight gain prior to the onset of symptoms, followed by downward drift against the centiles until antigen exclusion is adequate. This presentation probably represents the loss of initially established oral tolerance. 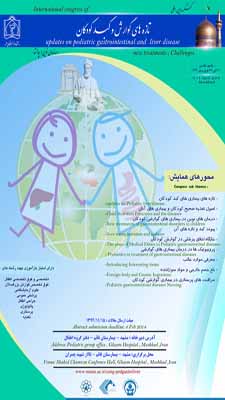