Evaluation of Parental Attitudes toward Lumbar Puncture in their Children

Introduction:
Sometimes physicians need to assess some markers on selected children's cerebrospinal fluid specimen according to lumbar puncture (LP). Although immediate diagnosis and treatment especially for meningitis is necessary, But just at this moment, due to some incorrect believe in society, some parents may not allow physician to do LP. The reality is that most of these people, if they have enough information about this issue, will not interfere. This study aimed to assess parent 's knowledge and attitudes toward this subject.

Materials and Method:
Through a cross - sectional study we evaluated 91 parents, who their child must been undergone LP as physician’s decision, selected during 18 months using purposive sampling. The data collection tool was a questionnaire including two sections of the child and the parents' knowledge and attitudes.  Scientific validity of the questionnaire was confirmed by content validity. To achieve the objectives, SPSS ver.15 and descriptive statistics and chi-square test were used.

Results:
61 parents(67%)  mentioned   fear of some side effects as the main reason of their children 's  LP discontent .The most important  cause of  fear was low back pain according to  50 (54.9%) parents 's view. 70 parents (76.9%) had some satisfaction after performing  LP .There was  statistically significant difference between proportion of satisfied parents and non-satisfied ones (p<0.001). Average score parental satisfact ion for LP was 7.2 +3.2 87.

Conclusions:
It seems that improvement of  parent 's information about LP process and it's benefits  by health care group  , may influence on their belief and cooperation during diagnostic tests.

One of indicators of child health is public health and reducing the incidence, early diagnosis and treatment of disease is an important objective the global health plans.

One of common diseases in infants and children are viral or bacterial infections, and they may spread to the central nervous system (CNS) and causes primary or secondary infection of nervous tissue. So one of diagnostic test on cerebrospinal fluid. Seizures associated with fever is a common finding  occurred  in 2-5% of children betwen aged 4 months to 5 years old (1-3). Seizure also occurrs in 25-30% of children with bacterial meningitis (4). Various investigations have been reported in patients apart from febrile seizures, other findings were not in favor of meningitis and  after spinal puncture (Lumbar puncture: LP) meningitis have been confirmed. Therefore, the researchers recommended that all children admitted with febrile seizure should undergo LP (5,6).  According to some studies in children less than 12 months old  suggest to perform LP, even despite the absence of clinical symptoms (7). However, the decision in this case is related to the physician's personal experience and whenever there is a suspicion of a CNS infection, lumbar puncture should be performed (8).

In a study in a medical center in Children's Hospital, Toulouse, France during (October 2009 to December 2010), 157 children less than 18 months, who were hospitalized because of febrile seizures for the first time, lumbar puncture in 40% of cases (63 patients) were performed.  Meningitis/ encephalitis had been detected in eight children: three cases of viral meningitis, three cases of bacterial meningitis (Streptococcus pneumoniae), and two cases of viral encephalitis other than herpes. Because the symptoms of meningitis are not clear in this age range, so lumbar puncture (LP) is widely recommended in these infants with febrile seizures. But retrospective studies have some challenges on criteria of age  (9).

Due to the LP is more invasive and different from other routine tests in children, Usually parents may disagree with LP due to their anxiety even disrupts the process of diagnosis and treatment. Although this problem is almost common, but little study has been done about it, especially in our country(Iran ).

According to have little findings about  this context and  its importance on child health, the goal of this study is assessment of parental attitudes about LP in their children.

This study was a cross-sectional study that approved by the Research Council of Northern Khorasan University of Medical Sciences in (2012-2013). Sampling was done during 18- months period at Imam Reza Hospital in Bojnurd.

Research tool was a researcher-made questionnaire which was confirmed by content validity and internal consistency (the correlation value (r=0.85) reliability.

According to physician's diagnosis and decision for LP, demographic data and information about the child's illness was recorded by an expert nurse. Also  we requested parents to express their satisfaction with the LP as a number from zero to ten.

Data were coded and analyzed by descriptive and analytic [one-way analysis of variance (ANOVA), chi-square test] statistics and confidence coefficient 95% by SPSS-15. P

Table2: Frequency of  Educational Level in Parents of Children.

74 (81.3%) of parents received information about LP from physician and 17 patients (18.7%) was notified by nurses. Three parents (3.3%) experienced LP in their  other child previously, and 2 parents (2.2%) had some experience about LP in their friends and relatives.

According to explain about LP process by health care group, 70 parents (76.9%) had some satisfaction after performing  LP .There was  statistically  significant difference between proportion of satisfied parents and non-satisfied ones (P<0.001).

There were various reasons for parental discontent to perform LP, and the most was fear of side effects (Table 3).

Table 3: Frequency of  Reasons Parents do not Consent, LP

During asking parent's point of view about LP importance for their children's diagnosis, we found that 13 parents (14.3%) express this importance is very so much. 26 parents (6.28%) believed to much importance.18ones (19.8%) believed to some extent, 2 parents (2.2%) told slightly, 7people (7.7%) expressed that this method has no effect, and 25 ones (27.5%) were unaware of LP necessity on their child's diagnosis.

It should be noted that in 4 cases's family members had undergone LP in the past.  5 cases's family members had history of seizures and disability. 3 children (3/3%) had congenital disorders one of them as a preterm twin had speech impairment, mental problems and CHD (congenital heart disease).5 children (5.5%) had pneumonia, kidney stones and seizure.

Average score parental satisfaction for LP on a scale of ten points equals 7.2 + 3.221. Also, T test showed that the average parental  satisfaction score in whom were aware of the need of  LP for diagnosis and treatment of disease, were more than ones who did not informed, so there was a significant difference (P<0.001). After the necessary follow-up, 11 children with meningitis (12.1%) were confirmed (Table 4).

Table 4: Frequency of the exactly diagnosis in children in the study

In this study, the main reason for LP dissatisfaction in 50 parents (54.9%) was fear of possible complications such as paralysis and back pain. Narchi study in 2012 on 24 families with discontent to LP, showed that 7 people were unfamiliar with lumbar puncture, 18 patients were fear of side effects (14 ones for paralysis and 4 cases for pain), 5 patients felt that lumbar puncture is not necessary and one of them had scoliosis (10).

Study by Wong  et al in 2010 showed  the main reasons for dissatisfaction LP by 48% of parents were fear paralysis, 6% had fear for mental retardation, 16 %were influenced by relatives and friends recommendations (11).

Deng's study in 1994 on  parental view about LP in their children with febrile convulsion reported that  the main discontent  reasons were  fear of paralysis, mental retardation,  child death, painfulness, weakened kidneys, which is consistent with some  our findings (12).

In one study in which asked parent's belief about their children's LP showed that   usually they refuse or disagree with it because of  fear of probable paralysis,  confusion due to incorrect popular guidance, fear of losing baby during LP, painfulness  process of LP (13,14).  Even parents who have not been involved in this program, had some fearing about paralyzing in children. Also in this study, relatives and friends were a source of information for parents and unfortunately they did not receive correct information from medical staff (15). Also, about 91% of parents tend to stay with their children during treatment process, such as LP, IV catheters and urinary catheterization (16). In some other studies, the parent-reported anxiety levels during LP was moderate, and there is no relationship between frequency of doing LP and their anxiety level (17).

In our study, 39 parents (42.9%) expressed importance need LP for diagnosis as too much and much of . According to parents's visiting on LP in Deng's study, 71.4% of parental and in Wong study, 46% of parents had some satisfaction about LP (14).

Our study showed that definite meningitis diagnosis in 11 children (12.1%), 36 children (39.6%) had febrile convulsion, 35 children (38.4%) had seizures plus fever and diarrhea. Our findings were in consistent with some studies results (9).

Based on the results of this study, the main reason for dissatisfaction of the majority of parents about Lp in their children, were fear of some side effects such as paralysis. Due to unawareness of most parents about LP usefulness in diagnosis and treatment for children, so it seems that the higher parent 's knowledge level in target group,the more positive attitude  in this regard, so they will behavior better.

It is notable that late detection, misdiagnosis or delayed treatment of meningitis associated with severe side effects, as in our study over 12% of cases (11cases) were found with definite meningitis in cerebrospinal fluid (CSF) assessment during LP. Therefore informing parents of affected children is very important in the treatment of such diagnostic tests. Therefore, it seems that it is necessary to pay more attention for training in national health plans.

The authors thank all children and parents that help us in this study. 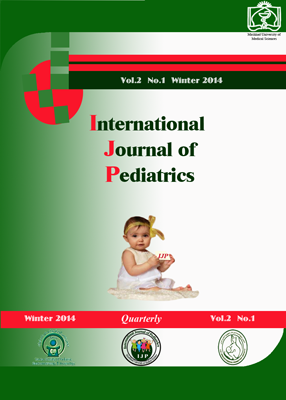