Introduction:
Human adipose-derived mesenchymal stem cells (hADSCs) are easily accessible in the body, and under appropriate conditions, they can be directed toward various phenotypes. Therefore, hADSCs have been considered as a potential cell source for tissue engineering applications. hADSCs are able to differentiate into endothelial cells which covers the interior surface of vessels, in vivo. CD271 is a surface marker for hADSCs and hADSCs purified based on this marker (ADSCs-CD271+) are more capable of differentiating into various cells such as endothelial cells. In the present work, ADSCs-CD271+ were exposed to endothelial growth factor (VEGF) in vitro, and using a perfusion bioreactor, the effect of shear stress (a mechanical signal that is naturally produced by blood flowing ), on their differentiation into endothelial cells was investigated.
Materials and Method: hADSCs were isolated from fat tissue and cultured in DMEM containing 10% FBS. Then they were characterized in passage 2, using flow cytometery technique. CD271expression level was examined and flow cytometry using antibodies was used to separate ADSCs-CD271+ from (p2) ADSCs. ADSCs-CD271+ were cultured and characterized and their expression level was examined. ADSCs and ADSCs-CD271+ in passage 3 were infused into 2 mm-diameter-silicone tubes coated with collagen I. The four experimental groups included control group (cells exposed to DMEM + 10% FBS, for 7 days), chemical group (cells exposed to differentiation medium containing DMEM, 3% FBS and 50 ng/ml of VEGF, for 7 days), mechanical group (cells were in a designed perfusion bioreactor, under application of 4 dyn/cm2 of shear stress for 24 hours) as well as chemical- mechanical group. Real-Time PCR was used to quantify the expression level of vWF (the factor specifying endothelial cells) in the experimental groups.
Results: in the current work, ADSCs showed 1% of CD271 marker, which was increased to 52% after purification. Evaluation of surface markers using flow cytometry confirmed the mesenchymal characteristics of both cell groups. According to the results from Real-time PCR, the chemical-mechanical group, the mechanical group and then the chemical group (in both purified and unpurified cells) showed the highest expression of vWF, respectively. The expression of vWF was generally higher in ADSCs-CD271+ groups compared ADSCs ones.
Conclusion: The findings of this study imply that MSCs purification as well as combining the chemical and mechanical factors can improve vWF expression. 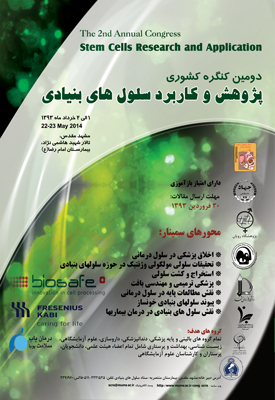