Introduction
Preterm infants are exposed to irregular light for several weeks or months in the Neonatal intensive-care unit (NICU). This lack of maternal entrainment, the exposure to irregular extrauterine lighting and care in the nursery may contribute to the disturbances in body temperature, sleep and physiological changes that are commonly experienced by preterm infants.
Materials and Methods
This is a randomized clinical trial dual group study, 38 preterm infants (gestational age of 30-34 weeks) due to prematurity hospitalized at NICU of Ghaem Hospital, Iran, were evaluated within 10 days. Infants were divided into two groups of 1200-1700 and 1701-2200g based on the weight and the weight of each group were randomized into artificial night (dark period was from 19 to 7 during incubator was covered with linen cloth & light period was from 7 to 19 removed the cover) and control groups (continuous lighting). Mothers & infants through questionnaires, interviews, observation & document completion, changes in physiologic & weight before entering the study & then physiologic changes twice a day, weight & feeding tolerance were collected daily. Data were analyzed using SPSS version16 software.
Results
The two groups were matched in terms of other variables. Mean gestational age was (31.39+1.39) weeks in both groups, mean weight at study entry in period light of the (1415.8+ 263.46) and (1471.6 + 244.47) was in continuous lighting. The difference in oxygen saturation, respiratory rate, respectively, higher and lower in the intervention group than the control group. Result of the statistical analysis of repeated measures suggests that the difference between the two groups was significant (P<0.05(.
Conclusion
The results of this study indicate that the effect of  artificial night on physiological stabilization of preterm infants is positive. In order to create a favorable and efficient environment to help better growth, prevent complications of  prematurity and impaired circadian rhythms in infants, pay more attention to the care conditions of infants is recommended.

Preterm birth, a major concern during the perinatal period, has a global annual incidence of around 13 million (1). The infant born prematurely is placed in an environment quite unlike that experienced at any other time of life (2). Neonatal intensive care unit (NICU) provides excess stimuli, therefore, preterm infants can become overstimulated if cared for in an NICU.

An important role of the neonatal nurse while providing care is to promote the preterm infant’s growth and development through the control of the NICU environment (3,4).(3), (4).

The fetus develops in an environment rich with auditory, tactile, and kinesthetic sensory stimuli, circadian rhythms provided by the mother, and Near darkness (ND).

The term infant continues to develop in a Cycled light (CL) environment with increasing circadian influences and multiple sensory stimuli. Thus, the needs of preterm infants can not be extrapolated from what is known to be best for fetuses or healthy term infants (5). One aim of modern neonatology is to create an environment to mimic that experienced in utero as closely as possible. However, the NICU environment is not optimal for preterm neonates, as it differs significantly from that experienced by the fetus, at least with respect to noise, light, temperature, and handling (2).

The American Academy of Pediatrics and the American College of Obstetricians and Gynecologists recommend neonatal care under cycled lighting (CL) conditions (i.e., lights on during daytime and lights off at night) instead of care in a continuous 24-hour bright or irregular Dim lighting (DL) environment (6) .

Light has both positive and negative potential effects on health and development. Continuous bright light has been related to infant stress as manifested in increased activity levels, decreased sleep, and bradycardia. Yet, CL has the potential to promote circadian rhythms with health benefits including hormonal regulation, activity- rest cyclicity, and vital sign regulation (5).

The circadian rhythm influences the rhythmic production of several hormones (melatonin, cortisol, growth hormone), respiratory and cardiac function, sleep-wake state, the level of alertness and body temperature. The circadian clock in mammals is located in the suprachiasmatic nuclei in the anterior hypothalamus and is present by 18 weeks of gestation. This master circadian clock organizes and orchestrates the timing of all biological functions, from complicated physiological systems to single cells  (7).

Thus, growth might either be decreased with the stress related to exposure to bright light or increased with the development of circadian patterns and rest-activity rhythms when exposed to CL. Length of hospitalization is directly related to the infant’s ability to gain enough weight to reach discharge weight criteria; thus promotion of growth is a primary goal of neonatal care (5).

This study investigated the effect of creating an artificial night on physiological changes in preterm infants in the hope that even a small step to be taken in order to promote growth and health of preterm infants.

This was a RCT study on which 38 infants who had a medical condition for stability and in order to gain weight and become mature were hospitalized in the neonatal intensive care ward in Ghaem Hospital, Mashhad-Iran; were selected( April 2012 to October 2012) .

First infants selected by non-probabilistic method and then divided into two groups by weight 1700-1200g and 2200-1701g and then randomly assigned to one of two groups divided the light period and continuous lighting. Each infant was assessed for 10 days.

Both study groups in demographic variables such as gestational age, age at entry into the study, birth weight and weight at entry into the study, amount of received calories, care time of kangaroo mother care, time Nothing Per Orem (NPO) before entering the study, feeding time, type of nutrition, use or non-use of optimal and Medium-chain triglycerides (MCT’s) oil, also the type of training that about the mother's breast milk was given to the mothers and kind of care they received, were homogeneous.

Each study group of infants under continuous and period light illumination, after a minimum of 12 hours of birth and their stability, also feeding through a nasogastric or gastric oral, were care in incubator, in both groups during the study were received  similar care.

Infants in the light period, for 10 days, received light in the form of a sequence of day and night. The light from 7 hours to 19 with the usual light and dark period from 19 to 7 that the lamps were lit room and incubators were covered with cotton fabric.

Incubators coverage from 19 hours to 7 only when the infant feeding and nursing care was pushed. Infants were monitored throughout the night with pulse oximeter.

Feeding infants in both groups were performed every 2 hours, and most infants were breastfed and formula-fed. The study of the control group was 10 days, in this way, the babies all day long in normal light of ward were.

Vital signs in infants in the intervention group included abdominal breaths in one minute and saturation of arterial oxygen incubated in the supine position, before covering the incubator at 19 and again at 7 am was controlled.

Ambient lighting levels in infant spaces shall be adjustable through a range of at least 10 to no more than 600 lux (B1 to 60 foot candles), as measured on a horizontal plane at each bedside (8). Of course, the light intensity should be reduced during sleep. Using a lux meter with mark Tenma revealed that 17 lux of light to pass through the cotton fabric. For statistical investigation, descriptive statistics (frequency, percentage, and average ± normal deviation) were used.

For comparing quantitative findings between groups the statistical test of independent t-test was used. The study was done using SPSS16 statistical software.

In the study of Guyer et al., (6) shown a significant reduction of fussing (59.4 minutes/24 hours (± 25.8 minutes) and crying (31.2 minutes/24 hours (± 14.4 minutes) behavior and a trend to higher motor activity during daytime was found in cycled lighting (CL)-exposed infants at 5 and 11 weeks’ post term corrected age (CA) compared with infants cared for in  dim lighting (DL)conditions. No significant difference between groups was observed for sleep behavior at 5 and 11 weeks’ CA. Infants in CL conditions showed a trend to improved daily weight gain (average: 3.6 g/d) during neonatal care compared with DL conditions.

Watanabe et al., (9) shown that developed a new device similar to a magic mirror, by which preterm infants can be shielded from exposure to their visible wavelengths of light even in the constant light conditions of the NICU while simultaneously allowing medical care staff to visually monitor preterm infants adequately. The results showed device leads to significantly increased infant activity during daytime than during night time and better weight gains.

Infants, especially premature infants are fragile creatures and need lots of attention. Since the purpose of the health team in providing comprehensive care with minimal complications for the infant's health and development, considering all factors, including environmental conditions that have an impact on growth and infant health is necessary.

The authors are grateful to all mothers and staffs for their help and cooperation during the study period. Clinical trials - registration ID: NCT01833091. 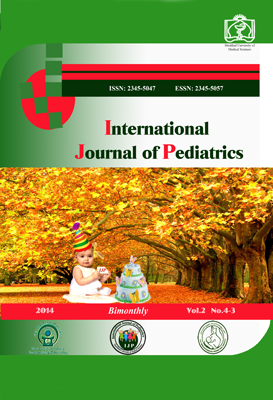